Video: A Tribute to Peter Rickett

This is a tribute video created to play during my Dad’s retirement party with the Greenville Symphony.  (Circa 1990)  It runs about 13 minutes.

I think this video was pretty well done and deserved of an Internet audience.  There were no credits on the production nor the VHS tape I’ve had stashed away in my drawer for nearly 25 years.  If someone knows the videomakers,  please write in.

Of the people appearing in the video, I know very few of them.  My mother, Betsie Rickett, is featured prominently.  The video is introduced by Bradford W. Wyche, at that time the President of the Greenville Symphony Association.  Others appearing: Dr. Richard Maag, James Parham, Karen Lawton, Mary (Evelyn) McCrary, Peggy Parham, Patricia Quarles, John Parham, Martha Kitterman, Joel Keller.

The date “4/29/90” was written in pencil in what looks like my father’s handwriting on the label of the tape.  VHS was never meant to be an archival video format, but the quality pulled from this 25 year-old tape is mostly passable.

Here’s an article cut-out from the Times-News (Hendersonville) that my Mom sent me in the mail.  (May 28, 1989)  The photo of my Dad conducting is a little freaky in terms of his hair and eye wear, but it’s a good article.  Sorry about the quality and presentation of the PDF but I think it’s worthy because of the way he’s quoted in the article.

View this document on Scribd

I ran across this ad for the Hendersonville Symphony in The Times News for June 4th, 1979.  I thought it worth including here for historical value.

Here are a couple of photos of my parents at the retirement party the GSO had for my father in 1986.  I believe it was at the Hyatt Regency, Downtown Greenville.

Below are photos I took in 1986 when my father conducted the Greenville Symphony in Beethoven’s Ninth Symphony.  If memory serves, I’m pretty sure this was a dress rehearsal the afternoon before the performance.  This is when the GSO’s home venue was McAlister Auditorium on the Furman University Campus. 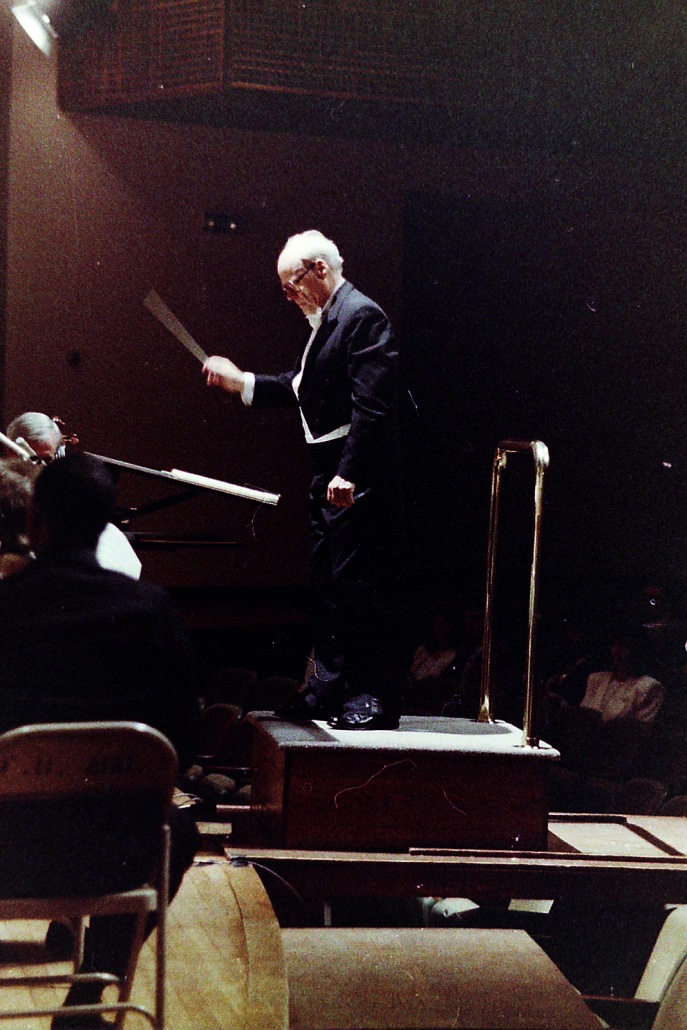 Conductor Peter Rickett at the podium. The podium seems to be precariously mounted between the stage and the first row of seats. I can only assume this was done to accommodate the “Choral.”

Sorry I can’t identify the guest soloists, but I do recognize our longtime family friend, Richard Magg, sitting first cello. 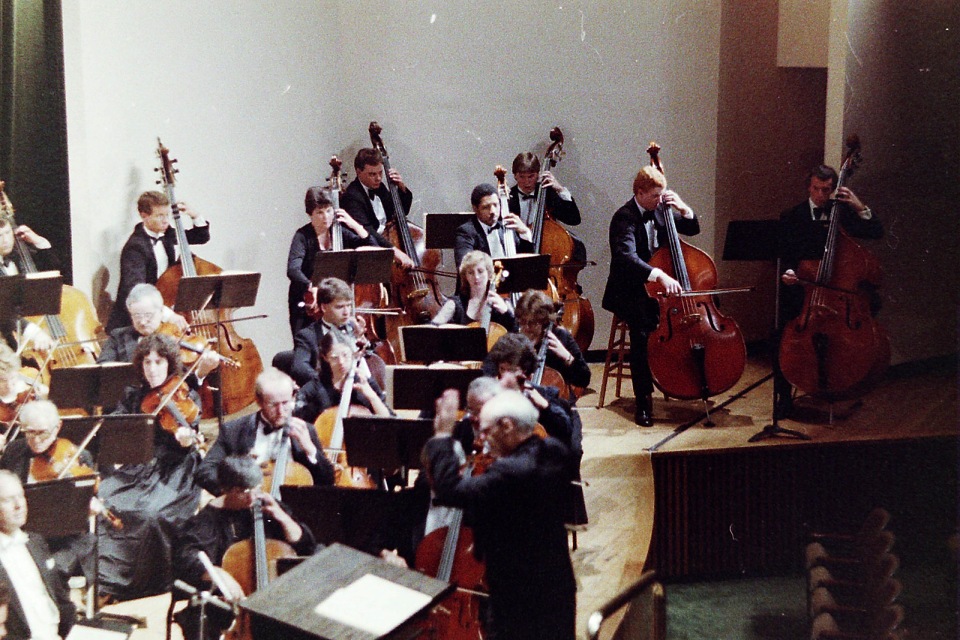 Naturally, I took a separate shot of the bass section. That’s my late brother, Steve Rickett, in the back row guesting from Savannah, GA for this performance. Also, I think that’s Tim Easter (2nd bassist from the right), the current principal bass player for the GSO.

Since I almost never sat in the audience, this is the view I remember my father best as he led the orchestra.

Photo notes:  The picture quality is not what I would hope for but it was the technology available to me at the time which was a Pentax 35 mm SLR (handed down from my father) with 5294 Kodak motion picture film processed by RGB Photo Lab in Hollywood, CA.  I was able to dig out the negatives recently and scanned them with an inexpensive 5.1 megapixel scanner I bought on Amazon.com.  Sorry about the hairs, I don’t have a suitable place to handle the negatives.

The Greenville Symphony created a wonderful “In Memoriam” page on their website for “the GSO’s first full-time music director and conductor.”  It’s very nice and we thank them kindly.  Click here to see to see it. 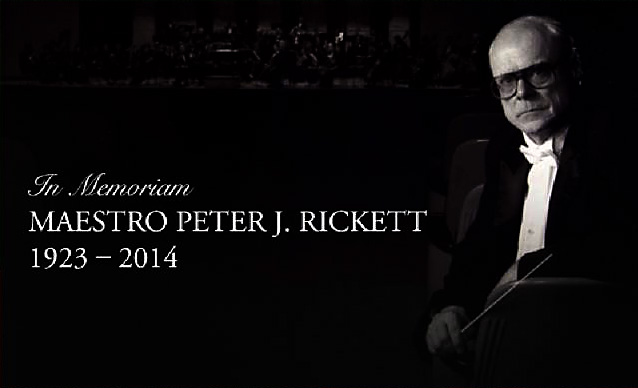 A Visit with John Abbott

This is a photo of my parents, Betsie & Peter, with character actor John Abbott circa 1991.  At the time I was helping John Abbott with the writing of his book about acting and his career. While my parents were visiting Los Angeles, I brought them over to meet the elderly actor.  Sadly, John Abbott’s unique and interesting book was never published. 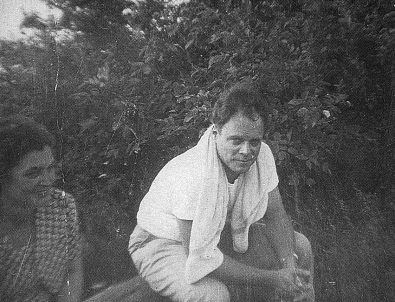 Here’s another photo from Picnic Point on Lake Mendota in 1947 (near Madison, WI).

Someone is going to have to explain this one to me.

Here’s Dad posing with his trusty 5-wood (metal) in 2006.  As I remember, the point of this photo was that at his age things went better when he teed off with his 5-metal (wood).  Somehow, that’s been true for me my entire golfing life.  This photo was taken on one of the courses in Sun City West, AZ. 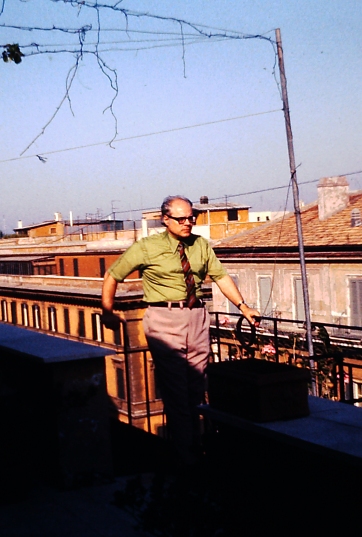 This was taken on Mom & Dad’s first trip to Europe in 1972.  I believe this was in Italy somewhere. 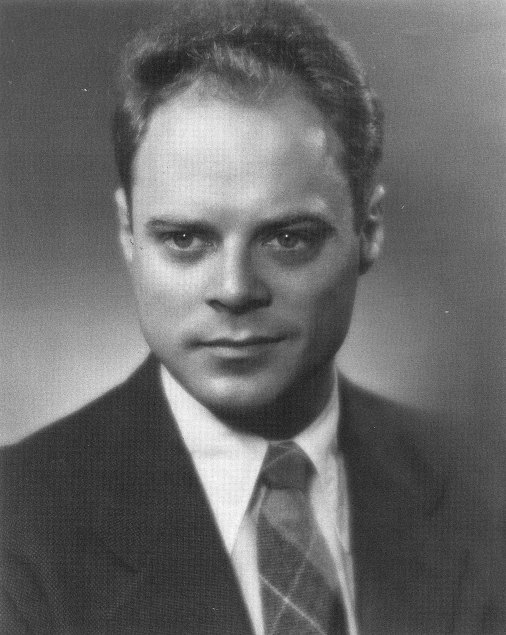 This is a portrait of my father, Peter Rickett, from 1950.  The photo has a note saying it was taken by Harold Hone, a well-known Madison, Wisconsin photographer and a family friend. 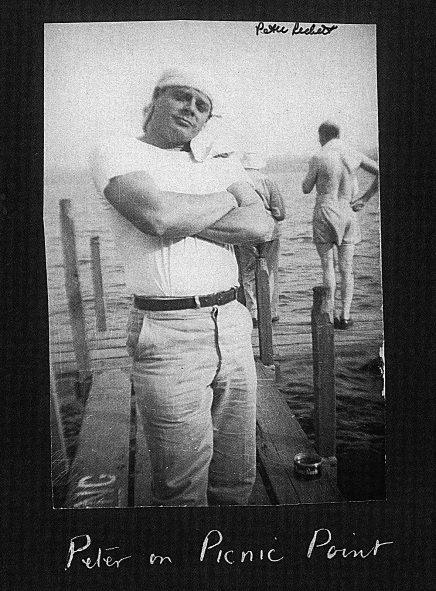 This is from 1947 near Madison, Wisconsin.  With that pose and attitude, he’s a spitting image for my late brother.

Dad with his Dad

This must be circa 1929.  I figure my father looks about six years old?  He ended up looking quite a bit like his old man.  As for more details about this photo, someone else is going to have to fill that in.